New high-speed coordinate measuring machines from Mitutoyo’s MACH series, which will successively replace the previous testing instruments, are used in the process. 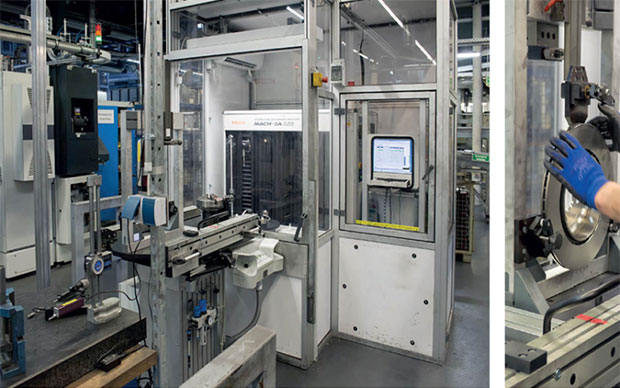 BMW AG reduces measurement times in the brake disc production environment at its Berlin-Spandau plant by more than 50 percent. 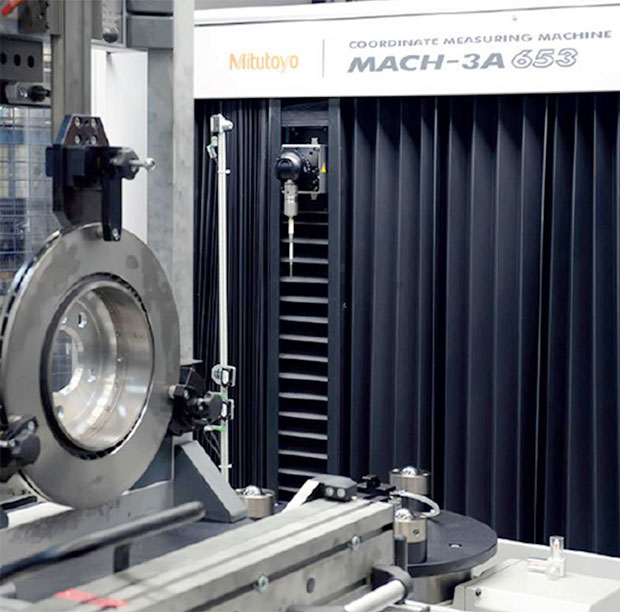 The Berlin production site is an important plant for BMW’s passenger vehicle production. The so-called “assembled” brake discs are produced here. These are weight-optimised light-weight brake discs which- in contrast to brake discs casta as a single piece-are assembled from a friction ring and an aluminium cup. An extremely sophisticated piece of engineering and a technology that contributes significantly to the low fuel consumption of BMW’s vehicles- while at the same time maintaining the highest safety levels.

Complex production methods with fundamental effects on the safety of the vehicle are inevitably subject to the most stringent testing requirements.

Random inspections at close intervals account for these requirements in the production of the assembled brake disks. Here, important features are checked which can no longer be tested at subsequent assembly stages. This includes, for example, the fit on the friction ring and on the cup. Once these two components are riveted, these spots can no longer be subjected to measurements.

In the past years, these complex metrological tasks were carried out using measuring instruments within the production environment. These are positioned in the inmediate vicinity of the production machines and provided with high-performance test benches as well as measuring devices and computerised equipment.

Just as the measuring instrument, hand-held measuring devices can also be accomodated in the extremely compact measuring atations, which are tailor-made taking into account both ergonomic as well as industrial safety aspects. They were developed and realised by the measurement instrument manufacturer Mitutoyo. Measuring technology by Mitutoyo has been used in the BMW plant in Berlin already since the beginning of the nineteen-eighties.

As the diversity and number of discs produced in Berlin increased, it became clear that the capacity of the measuring devices would reach their limit sooner or later. There was also a financial aspect: Every new model and every new brake disc variant introduced into the production program entailed considerable modification costswith respect to the measuring devices. In the log run, given a total of six measuring stations and currently 40 different disc types, this is a substancial item of expenditure difficult to calculate.

Moreover, the time factor played an ever increasing role in view of now two milion brake discs produced in three shifts. It was imperative that the entire measurement workflow as well as the testing process itself be accelerated.

At the beggining of 2012, Mitutoyo provided the measuring laboratory at the Spandau plant with a measuring machine for testing a newly developed brake disc- the perforated disc. A loan that was supposted  tide over a supply shortage of another provider.

This was the high-speed coordinate measuring machine MACH-3A 653.

It quickly became clear that this measuring system would also be ideally suited for use in brake disc production. After all, Mitutoyo had designed the MACH 3A 653 especially for inline high-speed measurements with high precision standards in the face of demanding operational conditions.

Thanks to its completely encapsulated design, this coordinate measuring machine thus proves extremely resistant to the influences of rough production environments. And all this within an expanded temperature range of 5 to 40 degrees Celsius. Good prerequisites, therefore, for BMW to incorporate this system into this production.

Time savings of 50% per cent

The test run only took a short time – for it was instantly convincing. Compared to the previous procedure for each measuring device, it was possible to reduce the testing times by more than 50 per cent with the MACH-3A 653. Full throttle on the “brake test stand”.

Actually, this not surprising if line takes into account the performance data of Mitutoyo’s measuring machine: with a maximun traversing speed of up to 1212 mm/s. and an acceleration of 11,882 mm/s2, which is ten times that of other coordinate measuring machines, this high-speed CMM reaches its target extremely quickly. These virtues are complemented by an impressive accuracy: the lenght measurement deviation values of the MACH-3A 653 start at 2,5 µm.

Other convincing highlights of this impressive machine include:

As an essential precondition, any measuring instrument used in a production environment at BMW was supposed to feature maximun user friendliness. It had to be ensured that workers tasked with random testing were able to operate the system in an uncomplicated and safe manner. 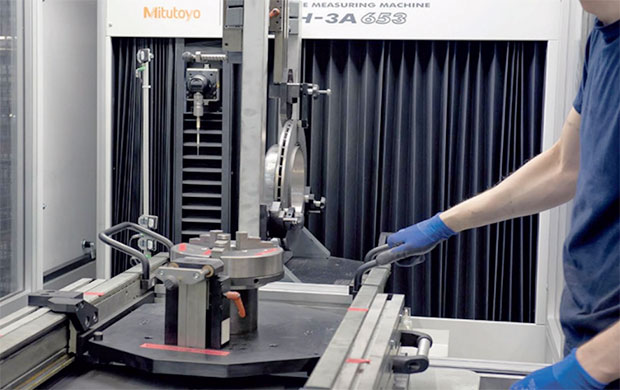 Sensors for recognising the devices in use provide for a safe process. In addition, Mitutoyo supports its customers in preparing an individual safety concept pursuant to the Machinery Directive.

The sum of all of these advantages led to an order of several MACH 3A 653 high-speed coordinate measuring machines by Mitutoyo, all at once.

All of the MACH-3A 653 installed at the Berlin plant are realised by Mitutoyo inclusive of their peripheral devices: With a made-to-measure loading system and acomodating devices as well as the integration of the software into the BMW-specific statistical evaluation system. Full throttle, then, also in this regard.

We use cookies to ensure that we give you the best experience on our website. If you continue to use this site we will assume that you are happy with it.I agreeCookie Notice